Read what Social Studies Teachers are saying about History Simulations 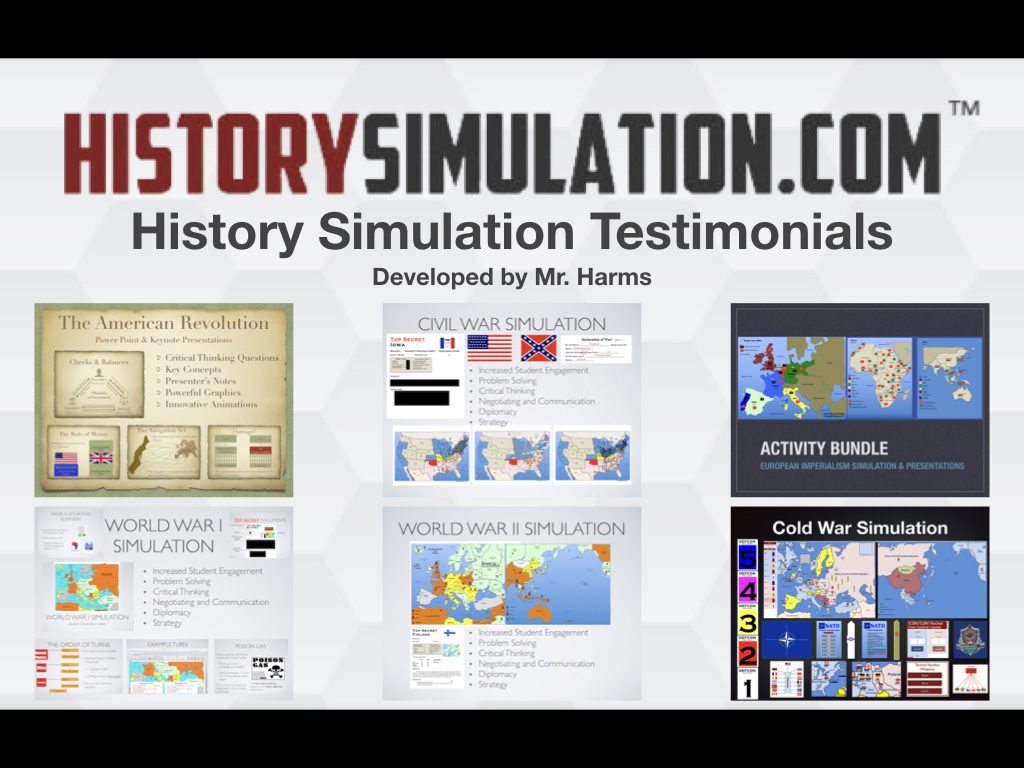 WWII- The World War Two Simulation is in a word; Outstanding!  If you are looking for a higher level learning experience that both challenges and excites, this is it!  My students were energized simply watching the instructional videos before the simulation even began.  Student engagement, participation and analysis of the strategies employed during the conflict  were heightened by your simulation.  I found it especially helpful in a block strategy approach where section one covered the interwar years; section 2 the simulation, and section three, a discussion of the actual historical events of the war.  Students were excited to compare and evaluate their simulation strategies to those actually used in World War II.  It really brought history to life for my class. I also cannot say enough about the HistorySimulation support staff.  All my questions and concerns were addressed long before I introduced the simulation to my class.  I cannot recommend enough this invaluable teaching tool...a must have for any history teacher.

WWII- These historical simulations have completely transformed the atmosphere in my classroom as we cover 20th Century wars.  My students engage in geographical study without even realizing it.  I have seen students both engage history as they had previously not done, and work with each other to achieve mutual goals.  My students really had to dig; not just into names and dates but into the motives and goals of the different countries, gaining a greater understanding to the underlying reasons behind the wars.  My students worked both in and out of class time, using strategy and critical thinking.  I highly recommend Historical Simulations for a unique and challenging classroom experience.

WWII- The simulation was an enormous success!  The kids were so engaged the whole time.  By having to constantly look at the map of Europe to plan strategy they now have a MUCH greater understanding of where countries are.  They had to use critical thinking skills to evaluate the best way in which to meet their objectives.  I had students coming in from last semester asking why I hadn't done this simulation with them.  In talking with teachers in my dept. and other students it was clear that the simulation was ALL my students were talking about outside of class.  I had students coming up to me after school and in between classes to ask questions on strategy.  For the most part, every country worked very hard to meet their goals, even if they did not all reach them.  Reading their journal entries on Google Docs was so enlightening.  They put so much detail and effort into planning their next move.  The journal entries, I think, are an integral part of this simulation as they get practice in writing, using technology, and a way in which to keep track of what's going on.  Thank you so much for this opportunity.  I will absolutely be using this again in the future.  My students are all ready asking me if I am going to be doing the Cold War Simulation for next year.  If so, they want to be able to take my class.  Thank you so much.  The kids think you are an absolute genius for creating this. I will be checking out the Cold War Simulation and might be using that in the fall.  Thanks again.

WWII- The simulation was fantastic! It truly exceeded my expectations. It is so exciting as a teacher to have your students actually excited about an assignment and this one filled the bill....There were several teachers in fact, that were glad when the week was over as students were planning their attacks all day long-before they made it to History.  Overall, it was great and I believe that they learned more about the strategy behind World War Two that is hard to teach out of a textbook.

WWII- One of the more fortunate developments of this school year was to receive an e-mail from Mr. Harms regarding his history simulations products. As traditional, textbook-based learning is becoming obsolete, there is a premium on interactive learning that engages students. History Simulations products do just that. Your students will look forward to these simulations and be unaware how much they are learning as they progress through the simulation because they are having so much fun plotting strategies, developing alliances and anticipating the decisions of others. With surprisingly little prep time, you can use these simulations effectively in your classroom and engage your students. Every history teacher at the secondary level can make great use of these simulations.

WWII- I used your simulation with my 7th/8th grade special ed class.  I had to go over the timeline for the war with my students first, so that they would have an idea of what their countries were doing in that year.  Once we got through the timeline for the year we were doing, my students took it and did a great job of enacting WWI.  Most of them really got into the simulation.  They were calling the student that Germany as the Troublemaker.  They figured out quickly that they had to go after Germany to be able to meet their objectives.  They did a great job.  They want more, so I got the simulation for WWII and we're going to do it again.

WWII- As an American history teacher, I am always searching for interactive lessons that will peak student interest.  The World War One simulation was exactly what I was looking for.  The students loved it, student engagement was high, and the simulation covered the state objectives.  If you need a new plan for teaching World War One, David Harms’ simulations are what you are looking for.

WWII- After using the World War One simulation, my students couldn’t wait for World War Two.  The intensity of every decision increases as the students become world leaders.  Student engagement is through the roof as every decision could alter world history.  There is no better way to teach the Second World War.

History Simulations: Over the years, I have heard more about the World History Simulations than any other lesson in any other class.  The students are fired up about it and cannot wait to participate.  The Simulations provide a hands on experience that meets the needs of all students.  They absorb the information.  They strategize.  They Learn.  It's a total package.

History Simulations: Mr. Harms' war simulations are very popular with the students.  The students get very involved and will strategize and collaborate every spare moment as they work through the simulation.  The students are always excited to do another one.

Student - "Can you believe that she declared war?"
Me - "Who? Where?"
Student - "In World History."
Me - "Let's discuss Spanish, please."
Student - "Mrs. Buss, we shouldn't have any assignments in any of our classes while we are doing simulations in Mr. Harm's room!"
"Excuse me," I ask.
Student - "This is the only thing we care about right now. It is so much fun!"
Me - (note to self), Thank you Mr. Harms!

I have been using and developing history simulations since 1992. When I first started using these history simulations, I learned quickly to organize an order of turns because students were literally running to class. Many teachers have commented on how excited students were and that a lot of spirited discussions were happening all over the school. A lot of parents had commented that this was the first time their kids had discussed what was going on in school and had asked their advice on what they should do. Students learn to problem solve as they work with other countries to achieve their objectives.

As we all know from the true history of the World Wars, there are two sides, the Allies and the Central Powers. So in the objectives for each country, students are given points to be on one side or another, but that doesn’t stop people from making secret alliances.
The simulations can come between friendships, change where kids sit at lunch, these simulations don’t just stay in the classroom. Some kids plot and scheme and lose sleep trying to strategically make their plans to take over the world. “I got way more into it than I ever expected to. It was actually really intense,” said junior Delaney V.

The idea came to Harms when he was student teaching. “The original simulation I saw was about six fictitious countries, and it was mostly just showing how alliances affect war,” said Harms. Harms started out using that idea, but after only three years, he turned it into its much larger idea that he uses today. “I brought in the binders, the objectives, the maps, the navies. I wanted this to be the real deal,” said Harms and that is definitely what he has done.

The World History Simulations were probably the coolest thing I did in my high school career. The best part would probably be the strategy that it takes to do the simulation. It is amazing how consumed many students become with this activity. The whole week you participate in this simulation, it is usually all you hear about outside of class. Who will align with whom? What country should we take next? If I was offered to do this on a regular basis, I would agree to this whole heartedly.

If you talk to the upperclassmen about this simulation, the majority would say it was probably the highlight of their four years in high school, including me. Not only was it fun, it actually taught me things as well. You learn how difficult it is to reason with others, and where you need to send troops for support to protect land, and how many troops you need to take over land. Also, the unexpectedness of the simulation adds to the game. Betrayal is just the name of the game. You don’t know what people need to do for their objectives, and it could turn out to be that they need to betray you. It just adds to the intensity of the game.

The simulations we did in Mr. Harms’ history class were exciting, fun and educational. I was able to truly understand the magnitude of World War II. The simulation motivated me to research in my free time and pay closer attention to historical details. To this day, I still feel that I have a much greater understanding and knowledge of history due to the simulation. The simulations sparked an interest in history that I still have to this day.