CREATE AN ENGAGING CLASSROOM WITH THE WORLD WAR 2 SIMULATION

Are you looking for a new and dynamic way to teach your students about World War 2? Instead of lecturing or handing out boring worksheets, engage your students with this hands-on WW2 simulation.

Using a WW2 Simulation to teach about World War II, creates a competitive environment and students don't even realize how much they are learning as they are immersed in critical thinking and problem solving in the classroom.

These WW2 Lesson Plans are designed for High School and Middle School. Students are assigned roles as leaders or foreign ministers of 18 countries involved in World War II. A year is roughly one 40 minute class period or equivalent.

On day one of the simulation, the teacher introduces the simulation and goes through the Student Orientation Video or uses the Power Point /Keynote Presentations. The Student Overview and 1939 World Situation Summary set the stage for Day 2: 1939, the opening of hostilities!

The game starts with the Axis Forces in the War Phase. This is when Axis countries can attack other countries. After all Axis War has been completed-they transition into the Movement Phase.

The Movement Phase is when Axis countries can move any forces they did not use during the War Phase. The Turns procedure was developed because students were sprinting to class to declare war!

Natural Resources are located on the map in the regions where they existed in the early 1940's. Your students will learn why these regions were strategically important. Each country's rating is dependent on the amount of resources they control or are supplied by their allies. Sequence of years for the WW2 Map Activity 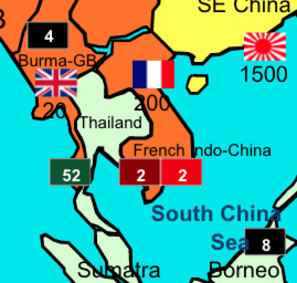 Standard 4: The causes and global consequences of World War II

Standard 4A: The student understands the causes of World War II

Therefore, the student is able to:

Analyze the relative importance of the legacy of World War I, the depression, ethnic and ideological conflicts, imperialism, and traditional political or economic rivalries as underlying causes of WW2.
Analyze the consequences of Britain, France, the United States, and other Western Democracies failure to effectively oppose Fascist aggression.