Our Cold War History page has lots of information including study guides about the major events of the Cold War and links to other information. Even though the Soviets and Western Allies worked together to defeat the Axis Powers, soon after both sides became very suspicious of each other. Alliance turned into rivalry as both East and West raced to grab German scientists and the technologies they were working on.

The name Cold War refers to the icy cold relations between the Soviet Union and The United States. Soon after the end of World War Two, major alliances developed: NATO, The North Atlantic Treaty Organization for the West and The Warsaw Pact made up of the Soviet Union and the Eastern Block countries. Soon a Nuclear Arms Race would lead the world to the brink of total annihilation on more than one occasion. It would all finally end with the collapse of the Soviet Union in the Early Nineties. 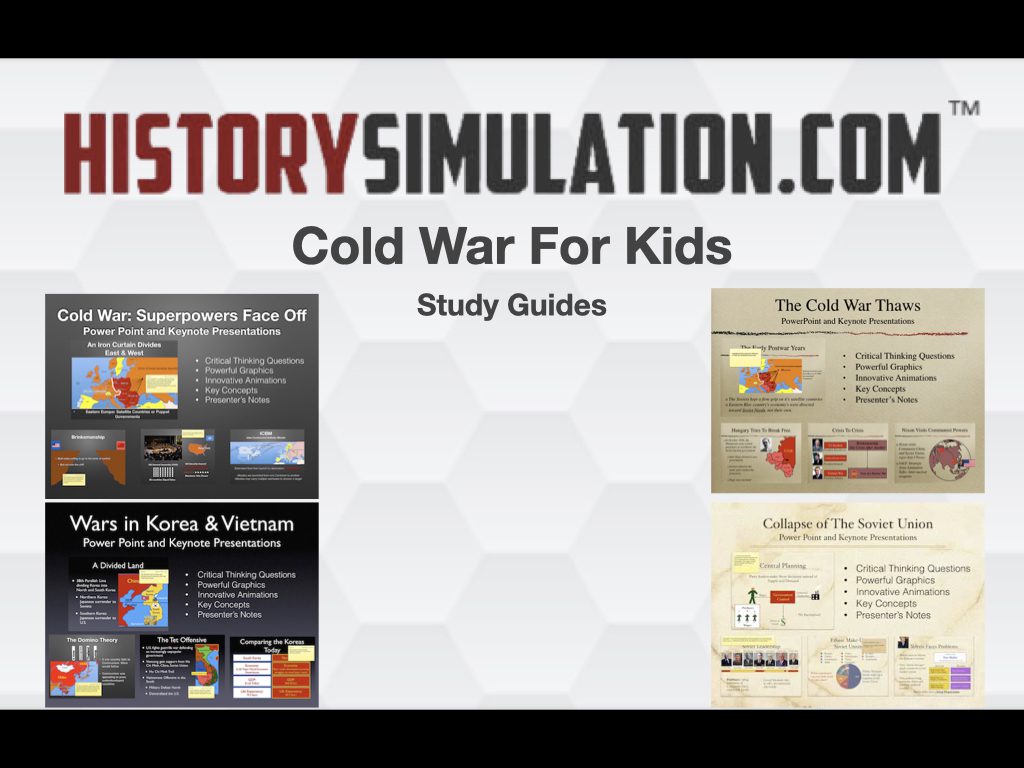 The United States and the Soviet Union worked together to defeat the Nazis, but soon after became very suspicious of the other.

The Cold War Divides The World

After World War II, Korea and Vietnam are divided in two and indirect wars between the superpowers began.

War Breaks Out In Vietnam

The United States Gets Involved

The Cold War Divides The World

After World War II, the Superpowers competed for influence in the Third World.

Fighting For The Third World

Confrontations In The Middle East

From Brinksmanship To Detente

​The Collapse of Detente

The Collapse of The Soviet Union

The Soviet Union stagnates and collapses in the late 1980's.

Reforming The Economy and Politics

18. ABC's "Viewpoint" Panel discussion on the movie "The Day After"

19. TEACHING THE COLD WAR THROUGH MAPS AND IMAGES​

The CGA is happy to present a set of resources designed to help educators and students engage in inquiries into the effect of the Cold War on perceptions and representations of the world as well as the use of maps and geographic information as rhetorical weapons in the execution of the Cold War.​
20. The Cold War Conversation Podcast

We’re about recording the personal stories and lesser known aspects of the Cold War. Our goal is to preserve these stories and encourage people to learn more about this critical period in world history. We are building an oral archive of those who lived through and experienced the Cold War first hand.