Although the Assassination of the archduke started the Great War, factors were building up over decades in Europe.  As the war begins, new technology, which most thought would make the war more mobile and end quickly, had the opposite effect.

Because of Imperialism, the war spreads across the world, involves many regions and bankrupts almost all the countries involved.

As awful as the war was, the peace agreement seems to be even worse as it sets the stage for a Second World War! 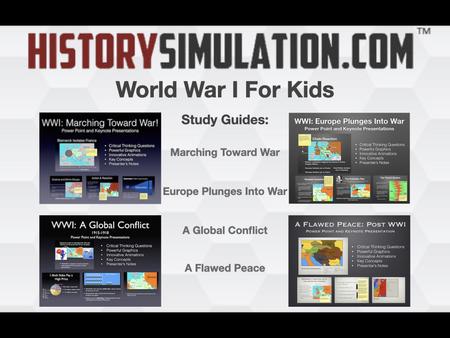 Nationalism played a key role in pushing Europe to war.  Imperialism help spread the war to the continents of Asia and Africa. Age old territorial disputes also helped fan the flames of greed and war. Militarism and the competition between countries for the most advanced weapons helped set the stage for unprecedented killing. A tangled network of alliances ensured a conflict between two countries would drag all of Europe into war.  Otto Von Bismarck had strengthened Germany's position by forming an alliance with Russia, but Wilhelm II allowed it to lapse creating a dangerous situation.  Trouble would come just as Bismarck predicted in the Balkans.  Gavrilo Princip shot the Archduke Franz Ferdinand and his wife setting off a chain reaction starting World War I

In 1914 Europe was divided into two major alliances: The Triple Entente and The Triple Alliance.  The assassination set off a chain reaction as one country after another declared war on each other.  As the war opened up on the Western Front, these new technologically advanced armies were locked in a stalemate.  The Russians moved quicker than anyone thought and put Germany into a two front war. Alfred Von Schlieffen came up with a plan to get Germany out of a two front war: The Schlieffen Plan.  The plan almost succeeded but German forces were halted out side of Paris in the First Battle of the Marne.  The Western Front turned into a stalemate as armies were bogged down into Trench Warfare.  By 1915-1916, Russia was exhausted and nearing collapse. The losses and lack of industry were putting great pressure on the resources and people of Russia on the Eastern Front.

From 1915-1918, the war took many turns.  The lack of industrialization in Russia put tremendous pressure on Czar Nicholas II and the Russian Army.  The Allies try to open another front against The Ottoman Empire, attempting to capture the Dardanelles Straight. The Gallipoli Campaign was a failure as the Turks stop the Allies. Mohandas Gandhi and the Indian People support Great Britain in hopes of achieving independence. Germany's Unrestricted Submarine Warfare coupled with the sinking of the Lusitania pushes the United States closer to war.  The Zimmerman Telegram pushes the United States over the brink and into WWI.  Nations turn to Total War to provide the resources that their armies and navies need.  In 1917, Russia withdraws from the War.  The last German Offensive in the West was the 2nd Battle of the Marne.  After the 2nd Marne Battle, Germany is exhausted and left alone.  An armistice is signed and the war ends on November 11th 1918 at 11:00 AM. The Legacy of World War I is both physical damage and psychological damage.

The Allied countries met in January of 1919 at the French Palace of Versailles. Even though over 20 countries were a part of the Allied coalition, a group called the Big Four made all the decisions: Woodrow Wilson of the United States, David Lloyd George of Great Britain, Georges Clemenceau of France and Vittorio Orlando of Italy. With Russia in a civil war and none of the defeated powers invited to the Peace conference, the meeting created a lot of animosity from both Allied and Central Powers countries.

​     Wilson had drawn up a peace plan called The Fourteen Points.  Self-Determination was a key theme of the Fourteen Points: Allowing people to choose their own government.  The Peace agreement that was decided upon was called the Versailles Treaty.  One of the key components that Wilson compromised over and over to get was the League of Nations.

1. Weapons of World War One

a. Pinterest board of weapons used in World War 1.

a. Pinterest Board of images, information and graphics dealing with the Great War.
3. WWI Hollywood Movies

a. Pinterest Board of Hollywood movies about World War 1.

a. WWI website with links to a lot of information & research on the war.

3. The History Channel.com: World War I

a. Videos and information on World War I. Biographies on major figures leading up to, during and after the war.

a. Videos on various topics of WWI.

5. PBS: The Great War A Nation Comes of Age

a. Drawing on unpublished diaries, memoirs and letters, The Great War tells the rich and complex story of World War I through the voices of nurses, journalists, aviators and the American troops who came to be known as “doughboys.” The series explores the experiences of African-American and Latino soldiers, suffragists, Native American “code talkers” and others whose participation in the war to “make the world safe for democracy” has been largely forgotten. The Great War explores how a brilliant PR man bolstered support for the war in a country hesitant to put lives on the line for a foreign conflict; how President Woodrow Wilson steered the nation through years of neutrality, only to reluctantly lead America into the bloodiest conflict the world had ever seen, thereby transforming the United States into a dominant player on the international stage; and how the ardent patriotism and determination to support America’s crusade for liberty abroad led to one of the most oppressive crackdowns on civil liberties at home in U.S. history. It is a story of heroism and sacrifice that would ultimately claim 15 million lives and profoundly change the world forever.

6. Legends and Traditions of the Great War

​   a. Links to topical information on World War 1

a. This archive of primary documents from World War  One has been assembled by volunteers of the World War I Military History List (WWI-L). International in focus, the archive intends to present in one location primary documents concerning the Great War.

8. The National World War One Museum

a. The National WWI Museum and Memorial is America's leading institution dedicated to remembering, interpreting and understanding the Great War and its enduring impact on the global community. Kansas City, Missouri

World War I Resources for the Classroom