World War 2 was easily the greatest and most widespread conflict in the History of the World! There were numerous conflicts before WWII that are detailed in the Study Guide: Aggressors Invade Nations. The Second World War officially begins on September 1st 1939, with the Nazi invasion of Poland detailed in Hitler's Lightning War. The focus turns to the Pacific Theater inJapan's Pacific Campaign. ​We take you from the deeps roots and history of antisemitism to the Final Solution in The Holocaust.

The Allies finally turn the tide of the war as German, Italian and Japanese forces find themselves on the defensive. The Allied Victory summarizes the drive on Berlin and Tokyo that eventually lead to victory in World War II. Finally, the aftermath of the war is detailed in Europe and Japan In Ruins. 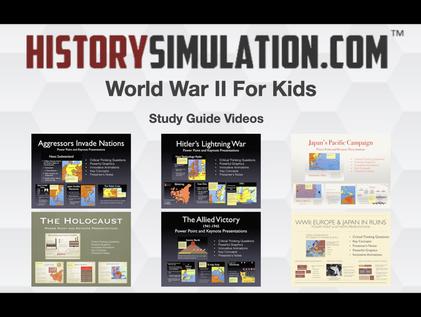 Italy, Germany and Japan become aggressive and other countries want to avoid war at all costs. The League of Nations failed to stop aggression. Militarists take control of Japan. In 1931, Japan invades Manchuria. In 1937, Japan invades China- halting the civil war between the Communists and Nationalists. In Italy Mussolini invades Ethiopia. In Germany, Hitler defies the Versailles Treaty, rearms and reoccupies the Rhineland in 1936. Germany-Italy and then Japan form the Axis Powers. The U.S. remains Isolationist. Germany and Austria unite. In the Munich Pact, the Western Powers allow Hitler to annex the Sudetenland from Czechoslovakia. Hitler and Stalin sign the Non-Aggression Pact to never attack each other.

The Nazi's and Soviets sign the Non-Aggression Pact. Hitler Invades Poland unleashing Blitzkrieg. The Soviet Union invades Finland. The French and British sit behind the Maginot Line during the Phony War. Germany invades Denmark and Norway, next the Low Countries. Germany next invades France. Hitler sets his sites on England and the Battle of Britain begins. Mussolini makes his move in North Africa. After failing to takeover Great Britain, Hitler shifts his focus to the Soviet Union in Operation Barbarossa. The United States aids its allies with the Lend-Lease program after the Atlantic Charter.

America enters the war in the Pacific as Japan's sneak attack on Pearl Harbor enrages Americans.

The Allies Strike Back

Nazi Racial Ideology leads to the Genocide of Jews, Gypsies and other groups deemed subhuman.

The Tide Turns on Two Fronts

Victory in the Pacific

a. On this site you will find all the German U-boats of both World Wars, their commanding officers and operations including all Allied ships attacked, technological information and much more. You can also browse our large photo gallery and thousands of U-boat books and movies. While hundreds of U-boats were lost some of the boats are preserved as museums today.
7. World War II Machines History
8. The National D-Day Memorial

a. It is hard to conceive the epic scope of this decisive battle that foreshadowed the end of Hitlers dream of Nazi domination. Overlord was the largest air, land, and sea operation undertaken before or since June 6, 1944. The landing included over 5,000 ships, 11,000 airplanes, and over 150,000 service men.
9. The Voices of World War Two
10. D-Day Picture Collection from France

13. The only known color film of the Japanese Surrender in 1945

a. This interactive map explores the complex and surprising evolution of Auschwitz, the scene of one of the worst crimes in human history. This was where more than a million men, women and children, most of them Jews, were murdered by the Nazis during the course of World War Two.

a. Peter Harmsen’s blog on the 1931-45 conflict and the birth of modern Asia

17. The War in the Pacific Theater

a. Our mission is to educate and inspire present and future generations about World War II in the Asiatic-Pacific Theater and the relevance of its lessons.

a. Memoirs and books that should be on your World War II reading list.

a. The World War II Database is founded and managed by C. Peter Chen of Lava Development, LLC. The goal of this site is two fold. First, it is aiming to offer interesting and useful information about WW2. Second, it is to showcase Lava's technical capabilities.

a. Our purpose is to share the story of the Royal Air Force, past, present and future – using the stories of its people and our collections in order to engage, inspire and encourage learning.

a. A tank museum with collections and exhibits from all over the world.

a. Our mission is to steward America’s first aviation battlefield of World War II – sharing the artifacts, personal stories, the impact and response to the attack on December 7, 1941 and the Pacific region battles that followed – and to honor those who have defended our freedom so we might educate and inspire future generations.

a. Interesting Graphics, Facts and information about the weapons of World War Two

a. The Harry S. Truman Presidential Library & Museum was established to preserve the papers, books, and other historical materials relating to former President Harry S. Truman and to make them available to the people in a place suitable for exhibit and research

29. HEARINGS BEFORE THE JOINT COMMITTEE ON THE INVESTIGATION OF THE PEARL HARBOR ATTACK

30. Voices of The Holocaust

a. This site focuses on the history of the Dachau Concentration Camp site after 1945

32. A Teacher's Guide to the Holocaust

a. The Timeline section focuses on the history of the Holocaust, chronicling the years from 1918 to the present.

33. The Voices of World War II

a. WWII Voices in the classroom is a project that was started in 1998 by a group of WWII veterans in Washington State. They wanted to present the personal side of WWII in their own words before they passed away. 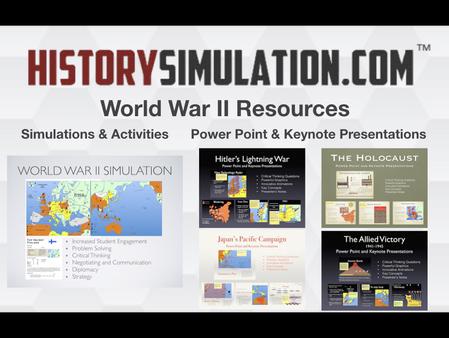