THE AMERICAN REVOLUTION FOR KIDS

RESOURCES TO TEACH KIDS ABOUT THE AMERICAN REVOLUTION

It has been called one of the greatest political experiments in World History! The courage, stamina and relentless pursuit of freedom of the American people is reflected in the story of its fight for independence and the government that was developed after the Revolutionary War.

See how the Enlightenment in Europe led to the Declaration of Independence.  Then watch as the country fights against the world's superpower and  transitions from the Articles of Confederation to the U.S. Constitution. 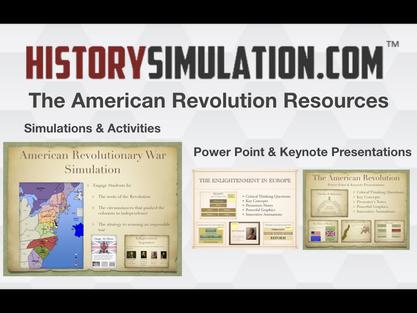 American Revolution Resources for the Classroom

22.2 The Enlightenment In Europe

The Scientific Revolution prompted new ways of thinking about: Government, Religion, Economics and education. Different political thoughts emerged. Thomas Hobbes believed in the Absolute Power of the ruler. John Locke, who believed that people could learn to govern themselves- Self Government. Voltaire, who used Satire (Humor and Irony) to poke fun at the rulers of his day. Montesquieu's separation of powers to put limits on the ruler. Rousseau believed that people were corrupted by the world.  He believed in equality of all men.

The American Revolution's origins can be traced directly to the Enlightenment.  The theme of no taxation without representation pushes the colonies towards independence. The Navigation Acts and The Stamp Act, fueled anger that led to the Boston Tea Party. The 1st and 2nd Continental Congress sees events moving towards the writing of the Declaration of Independence. Later the forming of the Constitution of the United States and the Bill of Rights.

Links for the American Revolution

​a. Hollywood movies and documentaries about the American Revolution. Please send us any suggestions to add to our list.

a. Pictures and graphics about the American Revolution.

a. A general overview of the Revolutionary War in America between Great Britain and the Americans

​          4. Myths of the American Revolution: Smithsonian Magazine
a. A noted historian debunks the conventional wisdom about America’s War of Independence​: John Ferling

7. The Declaration of Independence: The National Archives

a. The following text is a transcription of the Stone Engraving of the parchment Declaration of Independence (the document on display in the Rotunda at the National Archives Museum.) The spelling and punctuation reflects the original.

a. The American Battlefield Trust is America's largest non-profit organization (501-C3) devoted to the preservation of our nation's endangered Civil War, Revolutionary War, and War of 1812 battlefields. The Trust also promotes educational programs and heritage tourism initiatives to inform the public of the wars' history and the fundamental conflicts that sparked it.

9. Journal of The American Revolution

a. Explore the Museum from anywhere at any time with free digital resources for all ages, including a Virtual Museum Tour, a Virtual Field Trip, a rich archive of Read the Revolution book excerpts, a digitized collection of the Museum's art and artifacts, and more.

a. Livestreams about Thomas Jefferson and his life from Monticello his home.